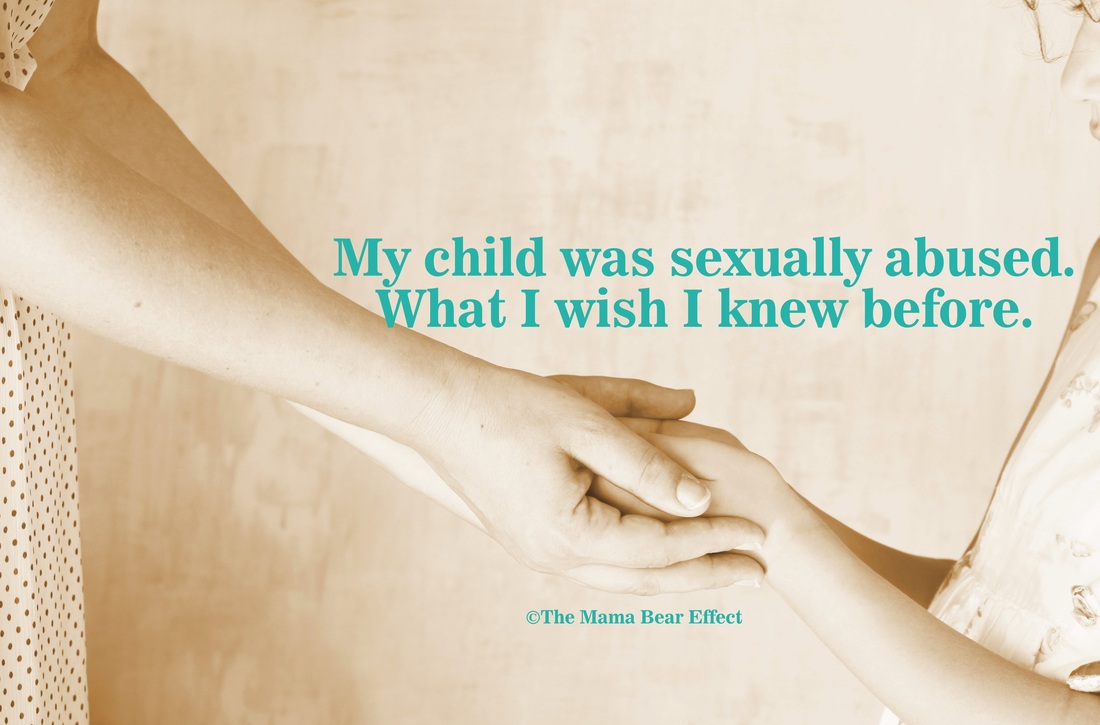 My Child Was Sexually Abused – What I Wish I Knew Before.

I am posting highlights from an article from a great supporter of what we do themamabeareffect.org, entitled My Child Was Sexually Abused – What I Wish I Knew Before. I encourage you to click through and read the whole article, it is very educational and insightful.

9 hard lessons every parent can learn from to keep their children safe from sexual abuse.

Parents of children who have experienced sexual abuse reach out to us often wanting to share their experience so that other parents can learn and hopefully spare their children.
These parents are overwhelmed with guilt – but in a world where abuse prevention education receives so little attention and funding – most parents are not even given the opportunity to be educated. There is a certain sense of shock and anger when these parents learn after the fact, how many children are being sexually abused, and what little is being done to prevent it.
Help us raise awareness and prevent abuse by sharing this post with your family and friends so that we can hopefully avoid this from happening to another family.

1. “TO TALK ABOUT SEXUAL ABUSE EARLY.”
Many parents think it is unnecessary to learn or talk to their kids about sexual abuse at an early age or are intimidated by the idea and put it off so they wont have to think about it. But the reality is – many children are abused before they even enter kindergarten.

2. “USING PROPER WORDS IS A BIG DEAL.”
Genitalia are really the only parts of our body that people purposely avoid using the real words for. It’s confusing, and it can make private parts seem fun or funny – which means when someone else starts using a made up word for your child’s genitalia- they will probably think it’s fun, too. And if they ever need to communicate to you or to anyone else that someone touched their ‘cookie’ instead of their vulva, you or another caring adult may miss the disclosure.

3.” STRANGER DANGER IS NOT THE SAME AS SEXUAL ABUSE.”
When we refer to people that touch privates as ‘bad’ this can confuse children – most offenders are known, trusted, nice, and often loved by the child. They are less prepared to expect this behavior from someone they know and it can make it difficult for them to get away or tell someone.

4. “I THOUGHT ABUSE WOULD ALWAYS HURT.”

Parents often tell their children, “if someone hurts you, tell me.” Children associate pain with abuse. But sexual abuse often doesn’t hurt. Children that are not educated that when their private parts are touched that it can feel good – that it’s supposed to feel good. They can become confused, embarrassed and ashamed. But worst of all – they may not tell because they don’t realize it’s abuse.

5. “I ONLY TALKED ABOUT YELLING AND TELLING.”

Children should not feel guilty for being too afraid to get away from their perpetrator. This is actually how many adults are raped – by fear and shock that a person they thought they could trust turns into their perpetrator.

6. “I DIDN’T KNOW WHAT TO LOOK FOR. I DIDN’T THINK IT WOULD ACTUALLY HAPPEN.”

Teaching body safety is great. It’s necessary. But so is educating ourselves and all the other adults in our child’s life.

7. “I THOUGHT PROFESSIONALS WERE DOING THE MOST THEY COULD TO PROTECT CHILDREN.”

If your child goes to a school, daycare, or is involved in a youth program – do not assume that they have up to date training and protocol for preventing, detecting, and reporting abuse.

8. “I THOUGHT REPORTING WAS GOING TO SOLVE THE PROBLEM.”

As an organization for the prevention of child sexual abuse, we promote that abuse or suspected abuse needs to be reported. That being said, it doesn’t mean that the perpetrator will be charged and convicted. Child sexual abuse is often a crime with little to no physical evidence. A child’s testimony is often the only evidence and, depending on the age of the child or the parent or prosecutor’s decision, the child may not be put on the stand.

9. “I THOUGHT PEOPLE WOULD SUPPORT US.”

Just about every survivor or supporter of a survivor that has reached out to us has expressed their pain in being rejected by family that refused to believe them or did believe but were angry at them for reporting and speaking out. It’s their weakness and they will defend it to protect their illusion of reality. If you haven’t experienced this, consider yourself very fortunate. If you have – be sure to know that you are not alone.

Are there women paedophiles?

The Female Abuser: Protected By Society