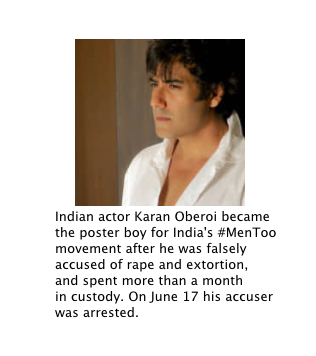 From #metoo to #mentoo

The intellectually lazy phrase “toxic masculinity” contributes to the generalized demonization of all men. In “Free Women, Free Men” (2018), Camille Paglia attacks feminist theory’s failure “to acknowledge the enormous care that most men have provided to women and children.”

In revenge feminism, men have responsibilities while women have rights. It is OK to probe a man’s background to establish a pattern of predatory behavior. But a similar check of an accuser’s history is “slut-shaming.”

#MeToo puts women beyond and above the law, privileging social media over institutional routes like police and courts to ensure accountability and justice. If the accused men seek legal redress through defamation suits, it’s described as backlash. Clearly, men whose reputations, careers, families and lives have been destroyed should suck it up, even if the allegations are false.

Today the stigma attached to a rapist is deeper than to a victim but rarely distinguishes allegation from conviction. Basic natural justice demands that the accused should have the same right to anonymity as the complainant, as in Ireland. The rapist’s identity should be revealed only after conviction. If the complaint is proven to be false, only her identify should be revealed and she should be subject to a penalty that matches what would have been meted out to the accused if found guilty.