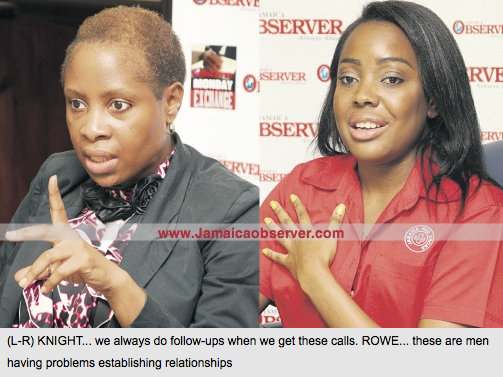 ALTHOUGH a number of Jamaican men still smirk at the idea of a woman raping a man, the increasing number of calls to the Marge Roper Counselling Service and the National Family Planning Board hotline are showing that more and more males are reporting rape and are pointing towards older women as the perpetrators.

This is nothing new. Older women have always been having sex with our boys. But I think now, with the sensitisation that is out there, boys are now realising that if I did not consent to it, it is rape,” she said.

But some men still say that this cannot be true.

“You cannot rape the willing,” said Curtis Benjamin, 42, and father of three.

“I don’t think it is physically possible for a woman to overpower a man and rape him. What she can do is seduce him and he will get aroused. Then he is not going to walk away he will give in to her. So that is why he now becomes willing. Once you are willing it is not rape.”

However, Dr Knight said that male rape should be taken seriously.

“I know a lot of people find the issue of male rape funny; because they think that men want to have sex all the time, and all men will have sex with anything and anybody, but that is not true,” she said.

For the complete article please visit the Jamaican Observer