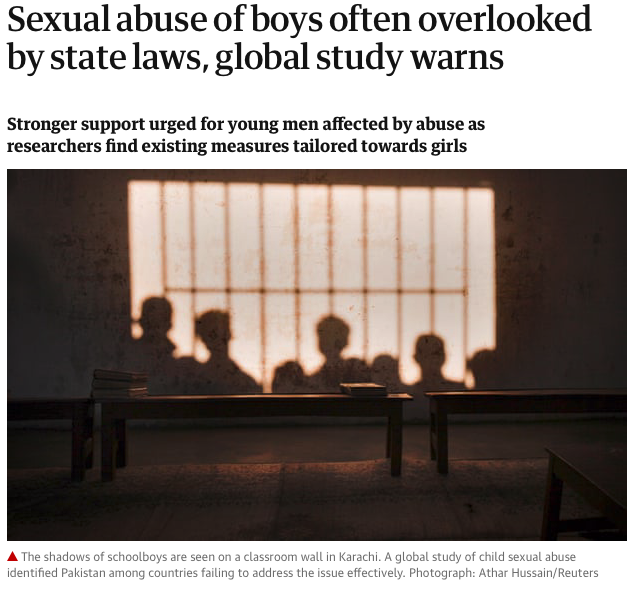 The Guardian wrote a BRILLIANT article and all I can say is about bloody time! We have been advocating for years for this decrepency to be address and finally our voice, and the voice of the millins of men we speak for, bgin heard. Bloody good show Guardian.

There is still a long way to go before we see sexual abuse and human trafficing removed from the realms of gender politics and into the realm of human rights. It baffels me how those lobbying for the rights of women and girls so freely and knowingly discard and deliberatly discredit the suffering of little boys and men around the world #notagenderissue

Sexual abuse of boys is “barely addressed” by the laws in many countries, according to a global study that warns of a lack of support for young male survivors.
The study, which examined child rape laws in 40 countries, found that just under half of jurisdictions lacked legal protections for boys. In many cases, laws were specific to girls and did not recognise boys as victims.
Researchers also identified a tendency for support services, including shelters and legal aid, to be geared towards women and girls.
“Often this is bundled up into an issue of violence against women, and therefore it is catering to girls rather than boys,” said Katherine Stewart, a consultant for Economist Intelligence Unit, which produced the report.

Social stigma, macho stereotypes and homophobia all contribute towards boys being less likely to report abuse, according to the report. The authors suggested that boys should be given tools and terminology that allow them to feel more comfortable reporting abuse or exploitation.

According to the rankings, Britain, Sweden and Canada are the countries tackling abuse most effectively. Pakistan, Egypt and Mozambique were rated at the bottom of the list.
Across all countries, researchers found limited data on the prevalence of child abuse and exploitation. Only half of countries have produced or endorsed data on the proportion of the population that has experienced child abuse. Only five collect such data on child sexual exploitation, a form of abuse where a child receives gifts, money or affection in return for sexual activity.
In some cases, countries only collected data on girls who had experienced abuse, or did not specify the gender of the victim.

DOES SEX TRAFFICKING HAPPEN IN MY STATE ?

Be The Example You Always Wanted To Have.