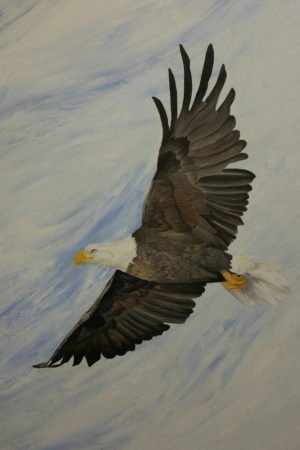 Soar Higher a story of PTSD and recovery

Soar Higher came about as Matt (not his real name) came to me with an image already in mind. Doing his story fulfilled a wish to paint this imagery. Here is his story.

Matthew grew up in a small community in a very large city. Like a lot of other inner-city kids, surrounded by people who looked like him, talked the same way, had similar values, he also felt very alone. Matt was only 2 when his parents got divorced and become another statistic of single parent kids. There are many things about his childhood he doesn’t remember, but he does remember feeling lost and alone. He felt unwanted by either parent as his mom always told him he was a mistake and his father never even tried to see him. His first memory of his father was a Christmas in grade school when his father came to give his brother a present. Matt ran and hid under the bed because he didn’t even know who his father was.

Matt was fortunate enough to be one of the many city kids around the United States who got to go to summer camp. Outside of the city and into the mountains, Matt felt alive and at home. He made friends, hiked, learned to scout and how to make a fire. Everything in the summer was joy until he reached the 7th grade.

You see, Matt had one close friend in the city who lived across the street. His friend wasn’t one of the kids that got to go to camp, so Matt went off to camp, knowing he would see his friend in a couple of months, but when he got home, he found that his friend had died in a horrible accident. There was no goodbye, there was nothing. In grief, he bonded with his friend’s brother, only to have that also end in tragedy. Unable to endure the grief on losing his brother, this older boy turned to drugs and then committed suicide while under the influence. Matt’s life turned a very dark corner.

Shortly after this, Matt was introduced to fantasy novels and was particularly enamored with The Lord of the Rings. He discovered a group that became fascinated with the dark side of the fantasy magic. The leader of this group was a White Witch. Before you scoff, Matt told me this was all very real. He saw things that scared and intrigued him at the same time. The power that he experienced made him feel powerful as well. It wasn’t long before he became involved with a form of Karate that delved into the darker, spiritual side of the martial arts. Every he experienced appealed the angry boy he had become.

One night while in High School the group he hung out with decided to have a seance. There were two circles, an inner circle, and an outer circle. Matt was a part of the outer circle. The group had a complete setup, just like you see in the movies. Present was an ouija board, a hanging ball, and the White Witch.  As everyone chanted together, the ball began to swing. It got very cold and Matt remembers someone saying the spirit that was there was malevolent. Some of the more experienced spiritualists told everyone to stay in the circles. “Don’t break the circle” because the spirit was still there. Behind Matt was candle which had been lit. At the moment that someone cried out to stay in the circle the candle exploded. Matt was convinced of Satan and his power, he had no doubts.

Around the same time, a drug dealer from the neighborhood suddenly began to act differently. He began to speak of God’s love. Matt had stopped going to church many years earlier. All he saw was an emptiness and a standard he knew no one could achieve. It made him bitter and angry so he left. Matt did not want to listen to this former drug dealer. How could this guy talk about love after everything he had done? But somehow Matt couldn’t get the words out of his head. Then one day the guy invited Matt to come to church. This was not even a consideration. Matt went home and Sunday night rolled around. While watching a favorite movie in the back of his mind he thought “you’ve tried everything else, why not this?” He believes now that it was God speaking to him.

Matt went to church that night. He got there late, so there wasn’t much place to sit. He ended up in the third row between two joyfully loud Christians. That night Matt heard the Gospel of Christ for the first time. Sitting there with so much shame for his life, he heard about how much God loved him. He became a Christian that night. The transformation was real. He felt differently. His anger gone, his shame disappeared, Matt was a new person.

Matt couldn’t wait to go to school and tell his friends what happened to him. There isn’t much of a welcome, though, for a kid whose friends are Satanists when you are trying to tell them about God. Once again, Matt found himself alone. He began reading and studying the Bible and read a verse from Isaiah 40 “They that wait upon the Lord will renew their strength, they shall rise up with wings as eagles.”

In that verse, Matt connected with something that had happened while away at camp. While hiking the campers got to the summit of a mountain. Matt was sitting on a precipice in awe of the view when he looked up and saw an eagle. Being a kid who in love with Lord of the Rings he remembered Gandalf sitting on the eagle’s back and coming to the rescue. The eagle was a symbol of beauty, power, and strength. He felt the protectiveness of the eagle from the story. It was that experience that connected Matt to the Bible verse. It became the imagery he connected most with.

When I asked Matt why he wanted his story told he had to think about it for a bit. “Mine is not a unique story,” he said “My life was full of despair. There were so many friends that died or been killed. I never thought I would live very long. I guess I want people to know that the worst of roads can change dramatically. Let me say, Your life can change. It is a moment of choice, and that moment is now.”

I have known Matt for several years. We met after he had been a Christian for some time. There is no reminder of that angry young man. There is no glimpse of the PTSD he once suffered. He still has occasional nightmares, but he knows it is in the past. Matt can look at his life differently, finding joy in today and in the future. For him, I named this painting Soar Higher.

How You Can Get Involved

If you have experienced loss and would like me to paint your story, please contact me at studio@kateshafferfineart.com This is for the Give Them A Voice Foundation. You can find the paintings for Bathed in Light, Relentless, and Beautiful Life on my website at http://kateshafferfineart.com  Look for the “Prints” tab. You will find the sizes and prices. Contact me to order. Half the proceeds go to Give Them A Voice Foundation. To find out more about what they do and where your money goes you can visit their website http://www.givethemavoice.foundation

Please post your comments below. Encourage those who have told their stories and tell us how you connect with those stories.

The Scream of The Silent